According to one the glossary of geology, “a lode is a mineral deposit consisting of a zone of veins, veinlets, disseminations, or planar breccias; a mineral deposit in consolidated rock”.  This is straight forward to most geologists, but in may not be for many prospectors. Most prospectors think of lodes as veins. This is partially correct, but a vein is only one type of lode.

The dictionary definition of a vein is more complex and I will only include those summaries that apply to our discussion as a vein can be much more encompassing. Some of the definitions include:

“(1).  An epigenetic mineral filling of a fault or fracture in a host rock, in tabular or sheet-like form, often with associated replacement of the host rock; a mineral deposit of this form and origin.

(2). A zone or belt of mineralized rock lying within boundaries clearly separating it from neighboring rock. It includes all deposits of mineral matter found through a mineralized zone or belt coming from the same source, and appearing to have been created by the same processes.
﻿
(3). A rock fissure filled by intruded mineral matter. Many valuable minerals are co-deposited with gangue in veins. Usually the formation is steep to vertical, unlike a bedded deposit in which values are sandwiched horizontally. Vein is typically long, deep, and relatively narrow.

(4). The term lode is commonly used synonymously for vein”.


Most prospectors visualize a lode to be a distinct vein of quartz. But lodes include more than just veins. But let’s briefly look at veins first.  Veins can be formed primarily of quartz, but another common gangue mineral is calcite. Gangue minerals are worthless material that is found with valuable minerals, and when combined, the two produce ore. So ore is just a mixture of the good and bad stuff.

The formation of ore shoot in veins is not entirely understood, but they appear in many cases to be the result of changes in chemistry sometimes due to changes in the rock type in the wall rocks. They have been identified where veins are folded or where veins intersect other veins or fractures.

Often prospectors and geologists get so focused on the vein, they miss all of the other good stuff nearby. At the Vulture mine, adjacent to the vein is a very attractive looking gossan. Apparently, only a minor amount of this gossan was mined by open pit - it may have been because it was low grade, but at any rate, it should be sampled in detail. In Arizona, there are numerous deposits of detrital gold found in fanglomerates that contain enough gold for placer miners. This may also be true at the Vulture mine where a distinct fanglomerate was dug into in the past.

At the Vulture mine, the gold-quartz vein has a prominent gossan adjacent to the vein and this gossan also has a fanglomerate (a conglomerate deposited as an alluvial fan and derived from a nearby gold deposit).

This fanglomerate appears to have had some values because the miners drifted into the eluvium.

At the Commonwealth mine in the Pearce Hills of the southern Dragoon Mountains of Arizona, in some places the lode is very district forming a prominent veins. But other veins in this area are referred to as stockworks and may not be so well-defined to prospectors even though most geologists would get very excited over these stockworks simply because the stockworks (veinlets) are often mineralized as are the rocks fragments in between. So these deposits often represent large tonnage deposits of low grade ore.

Most quartz vein gold deposits in Wyoming are mesothermal, meaning that they were formed at great depth. These are usually boring veins that show little textural or color difference and are difficult to predict if they contain commercial mineralization or just 'bull' quartz. One of the principal guides for gold in these types of veins are tawny to light yellow-green limonite associated with the veins.

﻿
﻿
In other areas, like Arizona, San Juans of Colorado and Nevada, many veins are epithermal (high-temperature veins formed near the surface) and may have all kinds of textural features including some opaline quartz, banding, and open vugs.

One of my favorite lodes is that of the Carissa mine in the South Pass greenstone belt of Wyoming. This lode is incredible. Everytime I led a field trip to this mine (possibly a dozen times or more), at least one person (or several) found samples of quartz with visible gold. Drilling established that the deposit was commercial grade and actually very high grade for a vein deposit. It averaged between 0.15 to 0.3 opt Au!

Being curious, while mapping this greenstone belt, I checked the wall rock at the Carissa lode and discovered that the wall rock was actually part of the lode! I found gold in the wall rock over a few hundred feet and found evidence that the shear zone (lode) was as much as 1,000 feet wide!!! Drilling by past companies also established that the gold mineralization continued to depths of just under 1,000 feet (no one had drilled any deeper). Based on the geology and ore deposit type, I would expect this lode to continue to much greater depth- 2,000, 3,000, 5,000 or more feet!  So here is was, the mother lode sitting in Wyoming. The gold deposit likely contains a few million (or more) ounces.

So, state government again proved they were filled with geniuses and purchased the mine, withdrew it from mining, and opened up a tourist attraction that brings as many as 200 to 300 people a year to the South Pass City historical site at no cost. 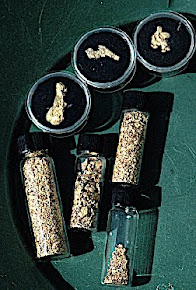